A Tribute to Anita Stewart 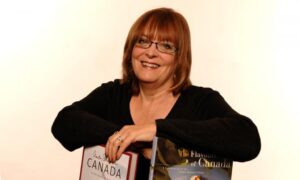 The local food world is a little less now as one of our stars has risen to angel status and will look on from above. She was the voice of the unheard. The farmers, processors and chefs. The ones making substance for all. Those fighting for food sovereignty. Those looking to define what many believe does not exist, the definition of Canadian Cuisine. In the most elite manor Anita Stewart is Canadian Cuisine.  It resonated in everything she accomplished throughout her career. It wasn’t just the cookbooks she wrote, or the chefs she knew. It wasn’t the places she visited, or the stories she told. It was her ability to inspire us all with a vision and a dream of what is and could be Canadian food.

I remember the last time I heard Anita speak, a few years ago when she gave a keynote about Canadian Cuisine at Terroir. She mesmerized a group of over 1000 with her stories of Canadian chefs, farmers and ranchers from all parts of the country. It was a truly Canadian moment. She made us all proud of the contributions we make to Canadian culture through food. She inspired others to share their stories and to continue building Canada’s cuisine. It was Anita’s gift to inspire action through her words.

Anita made it her mission to share Canadian food with the masses through the creation of Canada’s Longest Barbeque (what we know today as Food Day Canada).  It started as a mission to help ranchers overcome the challenges that were brought on by BSE (bovine spongiform encephalopathy). To give them a chance to tell their story and make them the center of our food world. It was a celebration of local food heroes who work tirelessly behind the scenes to put food on our plates. Many years later it has grown to be one of the largest celebrations of Canadian Food. Through the words, pictures and recipes of Canadians from coast to coast.  Food Day Canada is much bigger than famous chefs putting local food on the menu. It is much bigger than cities lighting up the sky in red to honour culinarians. It’s bigger than declaring the first Saturday in August Food Day Canada. It is the culmination of a lifetime’s worth of effort to lift others up and selflessly promote the story of those who have no voice. Listen to the stories of Food Day Canada, listen to the joy and experiences of those participating and you will see Anita Stewart.

If you cannot tell already, to me Anita was legendary. Someone I respected and admired. Yet I have only had a few dozen interactions with her throughout my career. I see the affect she had on people, her passion and her ability to inspire and influence others. In fact, much of my career is due to efforts initiated by Anita. Several years ago, Anita wrote a story that encouraged the government to support local. Given the influence Anita had they listened and acted immediately. I was with Foodland Ontario at the time and I saw the ripple effects, first at One Stone Road, then at other public institutions across Ontario. With further encouragement gathered from stakeholders, soon came the Broader Public Sector Access Fund and a whole new generation of public institutional leaders. Many of them won’t know Anita’s contribution in their journey and I don’t even know if Anita knew the extent of her influence. Then came the Local Food Act. All from the seeds planted by a few words written by someone who cared nothing more than to advocate for those that could not do it themselves.

If someone asks me what Canadian Food is, I say I now have the answer. Anita Stewart. A person who dedicated her life to revealing to the world what we eat, how we eat it and where it comes from. A person who inspired an entire generation of foodies to share their story of what local food means.  A person who took us on many journeys to understand one thing; Canadian cuisine is not about a single ingredient. It isn’t about a single chef. It isn’t a single dish. Canadian cuisine is about a journey, from field to fork. It’s the people and relationships that are made and the heroes that sing our song for the world to hear. Anita Stewart wrote our most precious food anthem, and that is the story of her life.

Let’s honour that life and that mission by remembering and sharing our stories every Food Canada Day.

Thank you, Anita. We will miss you immensely.